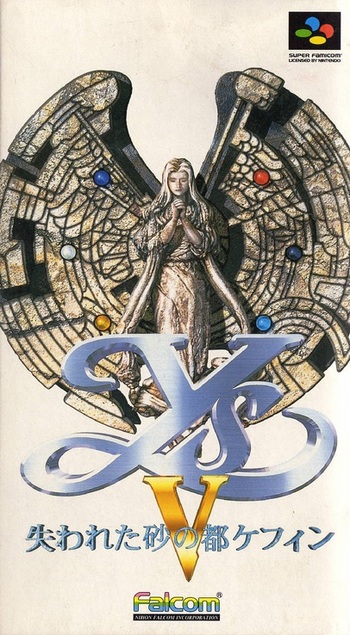 Ys V: Lost Kefin, Kingdom of Sand is the fifth primary installment of the Ys franchise, developed and published by Falcom and was released on the Super Famicom in Japan on December 29, 1995. Set some time after the events in Ys III: Wanderers from Ys, series protagonist Adol Christin and his traveling companion Dogi head for the city of "Xandria", located southeast from the continent of Eresia, upon hearing of the eponymous lost city of "Kefin" that had vanished five hundred years ago. Unlike his previous adventures that were set on Eresia, Xandria is located on the continent of "Afroca", which would be revisted down the line in Ys SEVEN.

Building on the Ys III game-play, Ys V retains having a dedicated attack and jump buttons, including defending with a shield rather than use the "Bump Attack" system, though it keeps the classic bird's-eye view perspective that Ys: Ancient Ys Vanished ~ Omen and Ys II: Ancient Ys Vanished – The Final Chapter had. Magic is also overhauled, where higher-level spells can only be cast by holding down a button, something that would be repeated later in future games. Finally, magic and physical skills are leveled up seperately rather than simultaneously.

In a twist, Falcom released a second version called Ys V Expert with increased difficulty less than three months later on March 22, 1996 for the same platform, published by Koei instead. A Video Game Remake for the PlayStation 2 would be released on March 20, 2006, but the developer would be Arc System Works, while Taito published it. To date, Ys V is the only non-Spin-Off Ys installment to not receive a localization.

Ys V has the following examples: