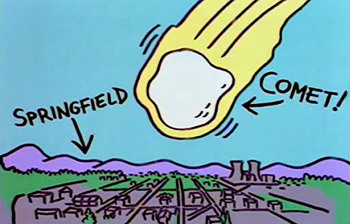 In fiction, an object falling from space, from orbit, or from high in the sky — completely unaimed and uncontrolled — has a disproportionally high chance of crashing (or threatening to crash) into an important or heavily-populated target.

It doesn't matter how small the target is, or from how high up that object is falling, the Theory of Narrative Causality will work hard to ensure that it won't crash into just any uninteresting or remote spot. If the narrative demands it, the object will crash in the worst (or best) place possible. In the worst-case scenario, this might lead to Monumental Damage. In the best-case scenario, the crash might bring a character to the exact spot where they need to be in order to advance the story.

This, of course, is in stark contrast to the actual odds for an object uncontrollably falling from that far up of actually hitting anything of value. Planets are gigantic, after all. The Earth in particular has over 70% of its surface covered by water, even further reducing the odds of hitting any dry land! And yet, since Writers Have No Sense of Scale, this sort of random precision occurs with alarming frequency throughout the various fictional universes, to the point where it can almost be expected to happen.

This trope potentially applies to nearly any out-of-control object hurtling from a great distance towards any target. It has only two criteria:

If both criteria are met, that qualifies as a Precision Crash.

Note that this trope is very similar to Colony Drop, where an object is intentionally dropped from high up in order to hit a specific target. Precision Crash, however, deals only with objects that are not actively directed to strike their target.

This trope is a specific case of Contrived Coincidence and often leads to It's a Small World, After All. Closely related to Piano Drop, which is based more on the immaculate timing of the drop than on geographic improbabilities. Compare Monumental Battle, since major battles also seem to be narratively attracted to places of interest.