Due to its immediate Sequel status, this page assumes you have played Ys: Ancient Ys Vanished ~ Omen, hence there are spoilers for that game. 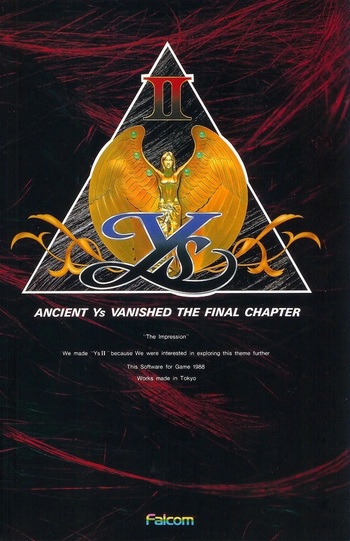 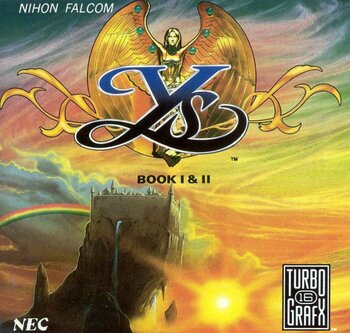 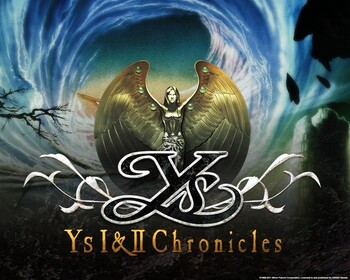 Ys II: Ancient Ys Vanished - The Final Chapter is the direct Action RPG Sequel to Ys: Ancient Ys Vanished ~ Omen, released on April 22, 1988, developed and published by Falcom. Ys II retains all of the game-play and combat mechanics of the previous game, while adding in magic spells that can be used via wands.

Following the Cliffhanger ending of Ys, Adol Christin is immediately transported to the titular Floating Continent that once held the "Ancient Kingdom of Ys". The secrets from both games would be revealed here, including the identity of the twin goddesses of Ys, the extinct "Eldeen" civilization they once belonged to, and the motivations behind the "Clan of Darkness", who not only serve as recurring antagonists throughout the franchise but form the Myth Arc of the series.

Like its predecessor, Ys II was first released on the PC-8801, but was also ported to multiple computers and home consoles such as the PC98, MSX2, Famicom, Sega Master System, all exclusive to Japan. However, both titles were given a Video Game Remake for the TurboGrafx-CD as Ys I & II, developed by Alfa System and published by Hudson Soft. Released on December 21, 1989, I & II feature improved visuals, animated cutscenes, and a Red Book CD audio soundtrack. This iteration would also be released in North America as Ys Book I & II in 1990, becoming one of the first Japanese video games to be dubbed into English in the process. In 1994, Ys II received a South Korean-exclusive Video Game Remake on MS-DOS as Ys II Special.

Due in part to the nature of the first game's ending and the second game's reliance on it, standalone re-releases of II past the 80's are few and far-between. However, the Ys I & II package would be re-released numerous times as a bundle on different modern platforms over the years:

Ys II and the many compilations have the following examples: