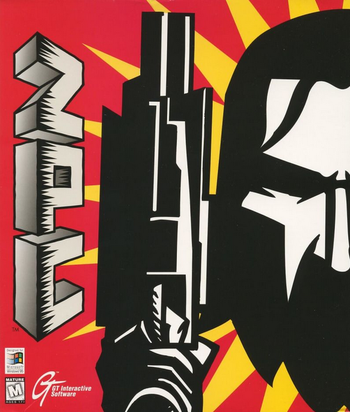 ZPC (Zero Population Count) is a 1996 First-Person Shooter, developed by Zombie Studios for Apple Macintosh and Microsoft Windows PCs. It used the Marathon 2 engine, and was noted for its stylized look adapted from artwork by Aidan Hughes (also credited with the game's concept). The story focuses on Arman, an exiled "Warrior Messiah" who has come of age and sets out to reclaim his throne.
Advertisement:

At some point prior to November 2003, Hughes announced plans to create or bring about a full-length ZPC film. However, nothing is known to have come of this.

Like many games of its time, it is now Abandonware, and can be downloaded here