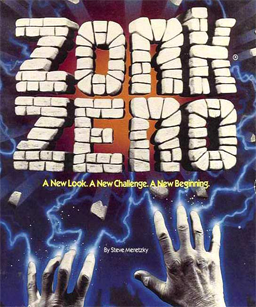 Zork Zero: The Revenge of Megaboz is an interactive fiction video game, written by Steve Meretzky over nearly 18 months and published by Infocom in 1988. Although it is the ninth and last Zork game released by Infocom before the company's closing, Zork Zero takes place before the previous eight games (Zork I, Zork II, Zork III, Enchanter, Sorcerer, Wishbringer, Spellbreaker and Beyond Zork). Unlike its predecessors, Zork Zero is a vast game, featuring a graphical interface with scene-based colours and borders, an interactive map, menus, an in-game hints system, an interactive Encyclopedia Frobozzica, and playable graphical mini-games. The graphics were created by computer artist James Shook. It is Infocom's thirty-second game.
Advertisement:

Previous games by Infocom used a parser evolved from the one in Zork I, but for Zork Zero, they designed a new LALR parser from scratch. Zork Zero's parser has some innovative features. If it notices if a player is having trouble with it, it offers helpful suggestions, such as sample commands.

Three of the four graphical mini-games are based on older logic puzzles. Peggleboz is a version of peg solitaire, Snarfem is Nim, and the Tower of Bozbar is Towers of Hanoi. Other puzzles based on established logic puzzle types include a river-crossing puzzle with a fox, a rooster, and a worm, and a Knights and Knaves puzzle in which violently xenophobic Veritassi and Prevaricons are truth-tellers and liars respectively, and peaceful Wishyfoo are alternators.

Lord Dimwit Flathead the Excessive certainly earned his nickname. Never one to do things on a small scale, when Dimwit decided in 789 GUE to have a statue erected in his honor, it had to be the largest statue ever. This angered a local resident of Fublio Valley (where the statue was built), Megaboz the Magnificent, who cast a deadly curse over Dimwit, the royal family, and the entire Empire before disappearing. The king's conjurers employed their most powerful magic in an effort to counteract the curse, but they were unable to save Dimwit and his eleven siblings; they only managed to delay the kingdom's destruction temporarily.

The game begins with a brief prelude in which the player is a humble servant in Lord Dimwit's scullery. Present when Megaboz appears and casts his fateful curse, the player manages to grab a small piece of parchment left behind in the chaos.

94 years later, the strength of the counter-curse is rapidly fading. If the curse can't be lifted by Curse Day, the anniversary of Dimwit's death, the Empire will surely fall. The reigning monarch, Wurb Flathead, has sent out a call in desperation: anyone who can save the Empire will be given half its riches! Predictably, this results in an avalanche of crackpot treasure seekers, none of whom have any more luck than did the royal sorcerers.

As the game begins in earnest, it is Mumberbur 14: Curse Day. The erstwhile curse-breakers have fled, along with everyone else in Flathead Castle. The player, a descendant of the servant from the prelude, awakes on the floor of the castle armed only with the scrap of parchment. The only other person around is the court's jester, who alternately helps and opposes the player in the quest to lift the curse.

Two items belonging to each of the "accursed twelve" (that is, Dimwit Flathead and his eleven siblings) must be placed into the cauldron and the magic word must be spoken. The game revolves around gathering these twenty-four objects and discovering the magic word. To accomplish this, the player will play the legendary game of Double Fanucci, travel to every corner of the Empire, solve a collection of riddles and logic puzzles, and visit the enormous statue that started all this trouble. There are even visits to locations such as the top of the world, and under the world (from which the player can fall). Flamingos, magic, bottomless pits and a unique sense of humor all feature along the way.

What happens when the curse is finally lifted is the game's final surprise. If you leave the castle and pass the perimeter wall, you arrive at the opening scene of Zork 1.