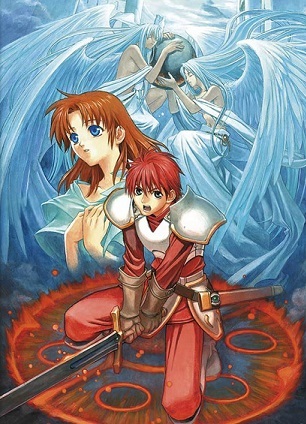 Adol Christin, saving the world for the umpteenth time.
"In my life, I've wandered everywhere... Around this world, hope would always be there."
— Excerpt from the opening of the English translation of Ys: The Oath in Felghana
Advertisement:

Ys (typically pronounced as "ease"note This pronunciation is the one used by Falcom themselves during one of the narrated trailer as well as the series' most common localization publisher, XSEED Games, though "yees" was used instead in the English localization of Ys: The Ark of Napishtim) is an Action RPG video game franchise developed by Falcom and published by its developer in Japan and currently published by NIS America worldwide, with a large number of companies having localized licensed ports in the past (such as the TurboGrafx-CD versions) that has spanned over thirty years and twenty consoles. Nearly all titles chronicle the adventures of Adol Christin, a wandering swordsman with fiery red hair who always seems to be in the right place at the wrong time as far as world-threatening disasters are concerned. The eponymous "Ys" is a mythical island floating in the sky, which is visited in some games and merely referenced in others.

The games have a few recurring characters (leaving aside Adol, who is the primary playable character in every game except for the Prequels Ys Origin and Ys Strategy) and take place in the same world with a consistent Continuity, but otherwise keep things fresh by introducing a brand new cast of characters, location, and scenario for every major release, not unlike fellow traveling swordsman-starring series The Legend of Zelda. Most are generally played with an isometric top-down perspective - the earliest games require Adol to "ram" into enemies in just the right spot to attack and defeat them, while later installments use a traditional Hack and Slash style of game-play (beginning with Ys V). The franchise has gotten Video Game Remakes and "re-imaginings" of installments in order to fit them better into the series' ever-expanding mythology (simulataneously, Compilation Rereleases like Ys I & II Complete and Ys Eternal, remakes of Ys I and Ys II, still feature ramming combat, which would be carried over to the PC and Sony PlayStation Portable version Ys I & II Chronicles).

Ys is also famous for its power-rock soundtracks composed by various members of Falcom's "JDK Sound Team", most famously by Yuzo Koshiro (I-II) and Mieko Ishikawa (II-III) and performed by Ryo Yonemitsu (music for the TurboGrafx-16 versions and the "Perfect Collections") and, more recently, Yukihiro Jindo (arrangements of Ys: The Oath in Felghana and Ys I & II Chronicles). In addition to standalone soundtracks, the TurboGrafx-CD games have much of their in-game soundtracks encoded in the same standardized "Red Book" format as a typical audio compact disc, allowing the game discs themselves to double as soundtrack CDs when placed into a CD player or other optical media player. Meanwhile, the Windows version of some Ys games store their audio files in the Ogg Vorbis format

(an open format, thus probably supported by almost any media player) and can be found and played by digging through the game's files and getting the ".ogg" files from the music folder. A few Ys re-releases also do special things with their soundtracks, specifically their soundtrack historynote Ys I & II Chronicles for the PlayStation Portable and the port of Ys: The Oath in Felghana to the same system have the option for players to choose between multiple versions of the games' soundtracks within the games themselves - Chronicles contains the original PC-88 soundtracks from the first two games as well as the newer Complete/Eternal versions, both in addition to the the JDK-performed remixes (the other two options are synthesized) new to Chronicles, while The Oath in Felghana contains the soundtracks from the PC-88 and Sharp X68000 versions of the original Ys III: Wanderers from Ys in addition to the soundtrack originally composed for The Oath in Felghana itself.

For the longest time, the franchise suffered from extensive No Export for You syndrome after the series' lackluster initial release push in the early 1990s, the primary reason why Ys was practically unheard of outside of Japan for so long. Beginning with the release of Ys VI: The Ark of Napishtim on the PlayStation 2 and PlayStation Portable, Ys: Book I & II on the Wii Virtual Console, and Legacy of Ys: Books I & II for the Nintendo DS, the games started to reach a much wider audience, with XSEED Games having announced a partnership with Falcom since 2010 that includes the localization of Ys SEVEN, Ys: The Oath in Felghana, and Ys I & II Chronicles for the PlayStation Portable in the North American market, in that order. By March 2012, XSEED and Falcom followed this up with a series of releases on the Steam service of Valve Software, starting with the original Windows version of The Oath in Felghana and the Japan-only Ys Origin, continued by a further-updated PC version of Ys I & II Chroniclesnote Ironically giving English-speakers the definitive version of that compilation. Finally, both companies capped it off with the release of Ys: Memories of Celceta, Falcom's definitive version of the Ys IV duology on the PlayStation Vita, released in English in November 2013. XSEED did not take the reins on 2017's Ys VIII localization because NIS America, which published the PlayStation Portable version of Ys: Memories of Celceta in the European region, outbid XSEED Games for the worldwide localization, publishing, and porting rights going forward post-Ys VIII.

Thanks to all this, the series' No Export for You tendencies are well and truly over. Between the PlayStation and Steam market, virtually every major Ys installment is available in English, both at retail and digital download. Although Ys V: Lost Kefin, Kingdom of Sand and Ys vs. Trails in the Sky remain the only ones untouched, even that merely extends to official localization - a fully playable Fan Translation patch is available courtesy of Aeon Genesis and Geofront, respectively.

The Ys series consists of:

At the start of 2021, Falcom announced that they are developing the next game in the Ys franchise. Of the little details they have revealed, this tenth-numbered entry will occur after Ys II and will have some combat inspirations to the Souls-like RPG genre.

There are also manga adaptations of Ys I, Ys II and Ys IV, though they diverge from the games considerably, including an eleven-episode Animated Adaptation of Ys I and Ys II. There are also a series of novels based on the games, as well as two side-stories with no game equivalents: Record of the Destroyed, set between Ys II and Ys IV, and Crusade of Blood and Sand, set immediately after Ys V. Of course, none of these are available in English, except for the OVA versions of Ys I and Ys II.

Last but not least, the music itself.

Not to be confused with the second music album of the same name by Joanna Newsom, nor is the series based on the mythological city of Ys (or Ker Ys), though the game does take its namesake from the myth.