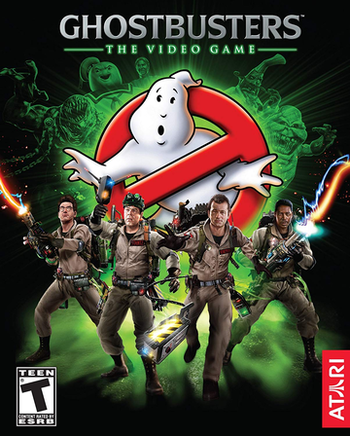 I ain't afraid of no ghost!
Peter: Hey, how come this mump gets all the new stuff?
Egon: He's our new Experimental Equipment Technician.
Peter: He gets a cool title, too?!
Ray: It means he gets to carry around a bunch of untested, extremely dangerous hardware that if not handled correctly could blow him somewhere into New Jersey.
Peter: Oh, this knucklehead lugs around our very dangerous prototype hardware that could potentially blow us into New Jersey? Thanks! Keep the title, kid. It'll work hard for you.
Advertisement:

Being the popular franchise that it is, Ghostbusters has managed to spawn a few video games in its lifetime. These games have generally been hit or miss, depending on the console and the development.

But the most successful of these games came out in 2009, in celebration of the 25th Anniversary of the original movie. Given a major multi-platform release and significant support from multiple companies, on top of featuring the voice talents of the core four Ghostbusters and other key members of the films, the game was a strong success and renewed interest in the third movie. Sadly, it was also the last Ghostbusters media in which the late Harold Ramis appeared.

The plot of the 2009 game is set two years after the events of the second movie, around Thanksgiving 1991. The Ghostbusters have been set up as official exterminators by the city, allowing you to mostly do your job with little concern of being sued as you have a massive insurance policy financed by the city. The game opens with a Gozer exhibit at the Museum of Natural History and a massive paranormal presence rippling out, pushing the Ghostbusters to become even busier than anticipated. Luckily, they have already hired on an intern, whose name is never actually spoken, and he goes on to help the original four Ghostbusters get rid of ghosts all throughout the city and uncover mysteries behind the first two movies, which allows you to visit many of the same locales. It also serves to tie the second movie in as an indirect consequence of Shandor's actions.

The original release came out for PlayStation 3, Xbox 360, PC, PlayStation Portable, PlayStation 2 and the Wii. The latter three systems were dubbed the "Stylized" versions due to the systems not having the hardware to create the realistic graphics of the higher grade systems. To compensate, the models were designed more akin in the style of the The Real Ghostbusters, making it look more cartoon-y; it likewise gave you the option to play as a woman, had co-op mode, a greater emphasis on puzzle-solving, and a few additional scenes and dialogue not featured in the realistic version, making it a nice collector piece.

Ten years after the original release, a remastered edition

of the Realistic version was announced for the PlayStation 4, Xbox One, Nintendo Switch and Epic Games Store. Released, fittingly, on October 4, 2019.