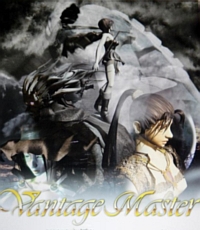 A series of PC Turn-Based Strategy games by Falcom. The original Vantage Master was released in December 1997, and was followed by Vantage Master V2 in early 1998, and by VM Japan in 2002. 2002 also saw the English translation of the original game (well, sort of) and it becoming available for free download on their website

. The other games still haven't been released outside of Japan.

All of the games have you play as a summoner capable of calling forth elemental creatures known as Natials in battle. The gameplay consists of duels between summoners, who move around the hexagonal board trying to capture magic stones which provide more mana for additional summoning. In a campaign, every battle earns you a new Natial or a new spell.