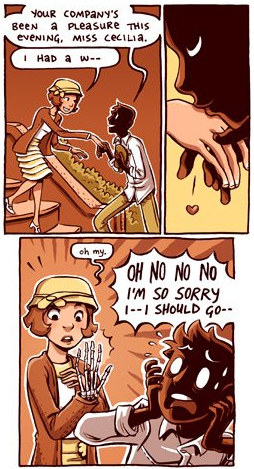 He's probably wishing he could control his.
"This power that we have comes from a dark place, but it's not who we are. And we can use it to help people."
— Johnny Blaze, Ghost Rider: Spirit of Vengeance
Advertisement:

You've heard of Bad Powers, Bad People, where people got powers that only seemed to have evil uses and went evil. You've heard of Good Powers, Bad People, where bad people used their good-themed powers to do evil, but what about the good people who got cursed with evil powers and try to use those powers for good? Some folks are able to turn this to their advantage, others find that they can't do it. Which is prime angst material.

Goes hand-in-hand with Dark Is Not Evil. Friendly Neighborhood Vampires also often exhibit this trope. If a character's "good" use for their bad powers is that they only use them against villains, then it counts as Good Is Not Soft or even Pay Evil unto Evil (depending on the nature of the Bad Powers).

Naturally, given how the danger of their abilities clashes with their moral alignment, such characters often get burdened with a No-Harm Requirement and have to figure out how to save the day without causing too much damage or death.

Contrast My Species Doth Protest Too Much; that's when it's a matter of a member of a (commonly thought to be) Always Chaotic Evil species decides to cowboy up for the good guys. A subtrope is Faustian Rebellion, where powers the Big Bad granted to a former minion are used this way. Also see Phlebotinum Rebel, where good guys use powers made by the bad guys but they're not "bad powers" per se. Compare to Mike Nelson, Destroyer of Worlds and Anti-Anti-Christ. See also Power Stereotype Flip, for when it's the personality, not morality, at odds with the powers, although there could be overlap.