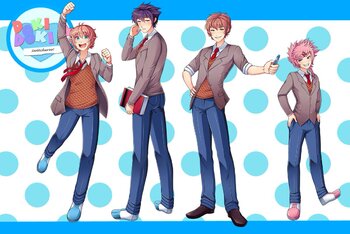 Doki Doki Switcheroo! is a fan mod by MWRoach

. In this fan game based on Doki Doki Literature Club!, you play the role as the childhood friend of Satori who asks you to join his club one day. Despite some initial hesitation, you agree. Upon arriving to the literature club, you meet Natsuko, a flirtatious young man with an attitude; Yuuri, a tall, shy boy with a deep fascination with books; and Mateo, the witty president of the club.

After three years of development, the full version was released on October 31, 2021, just in time for Halloween. The mod can be downloaded here

This fan mod provides examples of: