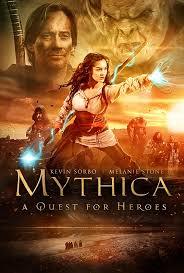 Mythica is a series of High Fantasy films produced by Arrowstorm Entertainment. It consists of:

Magically talented slave Marek escapes from her owner, and joins priestess Teela, fighter Thane and half-elven thief Dagen to rescue Teela's sister Caeryn from an ogre. The artefact that Caeryn is carrying turns out to be more important than first thought, and Marek's magic to be more powerful and dangerous.

Tropes appearing in these films