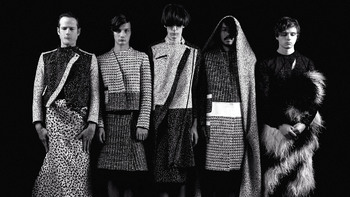 Deerhunter is an American "ambient punk" band based in Atlanta, Georgia, known for its unique songwriting.
Advertisement:

In 2005 they released Turn It Up Faggot to mostly positive reviews. They quickly dispensed with the sound because of the “negativity” surrounding the recording process, caused by the death of the original bassist, Justin Bosworth, in a freak skateboarding accident. Their next two albums, Cryptograms (2007) and Microcastle (2008), were met with enthusiasm, usually looking at Bradford Cox for his interesting lyrics and vocal melodies. In 2010 they released Halcyon Digest to critical acclaim. It was on this album where Deerhunter picked up a folk-influenced sound, but then discarded it upon the release of their 2013 album, Monomania, which drew heavily from garage rock, noise rock, and punk sounds. When Bradford Cox was hit by a car in late 2014, the accident that "provided a perspective-giving jolt". This greatly impacted the more serene, self-assured perspective heard on their next record, Fading Frontier (2015). In 2018, Deerhunter released the cassette-only Double Dream of Spring, limited to 300 copies and sold only on tour. The band's newest proper album, entitled Why Hasn't Everything Already Disappeared?, was produced by Cate le Bon and released in January 2019.

Not to be confused with The Dear Hunter.