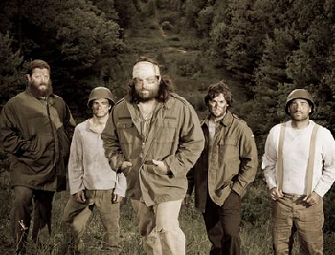 The Dear Hunter circa Act III: Life and Death

The Dear Hunter is a diverse musical project formed in 2005, not to be confused with indie band Deerhunter or the homophonous film The Deer Hunter. The band's lineup has changed many times since its formation, but at its core are Casey Crescenzo (lead singer/multi-instrumentalist/producer/songwriter) and his brother, Nicholas Crescenzo (drums/percussion/backing vocals).

The band's Pun-based Title is derived from the tale told throughout the band's discography. To paraphrase, the story is basically about a boy who grows up in complete innocence out in the country with his loving mother.

The bulk of the band's chronology is the boy's experiences as he is forced to come into contact with the real world, which quickly proves itself to be unforgiving and corrupt.

The band has also released several extended plays which are a departure from the story, most notably The Color Spectrum (2011), a series of concept albums, four songs apiece, which chronicle the 7 colors of the color spectrum along with black and white (9 extended plays and 36 songs in total).

open/close all folders
General
Act I: The Lake South, the River North

Act II: The Meaning of, and All Things Regarding Ms. Leading
Act III: Life and Death
The Color Spectrum
Act IV: Rebirth in Reprise
Act V: Hymns with the Devil in Confessional