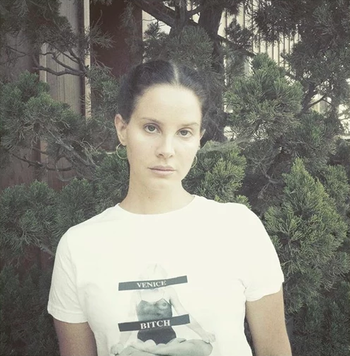 "You took my sadness out of context..."
— "Mariners Apartment Complex"
Influences:
Advertisement:

Lana Del Rey (born Elizabeth Woolridge Grant, June 21, 1985 in New York City) is an American singer-songwriter and model. Hailed as one of the most influential musicians of her time, her music is noted for its cinematic quality and thematic focus on tragic romance, glamour, and melancholia, often through references to contemporary pop culture and mid-20th century Americana.

Originally recording under a nickname of her real name, Lizzy Grant, to little success, she later created her current Lana Del Rey persona after wanting a name she could "shape the music towards", being inspired by her frequent visits to Miami where she would spend time with Spanish-speaking Cuban friends, as well as the combination of the first name of Lana Turner and the Ford Del Rey sedan. Also, she just liked the way it sounded.

After settling on her new name (although her first album was credited to Lana Del Ray), Lana posted a few songs to YouTube with accompanying DIY music videos made on her Mac. One song in particular, "Video Games", caught the attention of many music blogs and critics alike. To capitalize on the sudden interest in the track, Lana released "Video Games" (with B-side "Blue Jeans") as a single on Stranger Records in October 2011, and it became a Sleeper Hit all across Europe. Not long afterwards, Lana was signed to Interscope Records, and her (major label) debut Born to Die was released worldwide in January 2012. For a relative unknown like Lana, it actually sold pretty well in its first week; she even managed to knock Adele's 21 off the top spot in many countries, including the UK, and eventually went platinum.

Lana is known for using the character of Lana Del Rey as a very constructed persona whom she plays in the public eye and explores through her music. She is also known for paying homage to icons in order to associate herself with their brands of mystique or to set moods, including Marilyn Monroe, Lolita, Elvis Presley and Billie Holiday.

The artist formerly known as Lizzy Grant provides examples of:

open/close all folders
A-D
E-L
M-P
R-U
V-Z
"Hope is a dangerous thing for a woman like me to have...but I have it."
Feedback