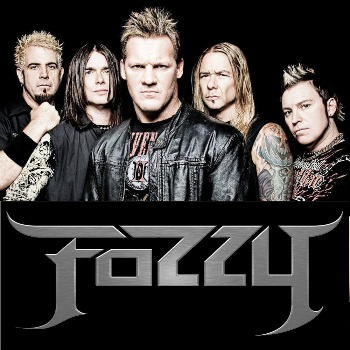 "WE ARE HUGE ROCK STARS!"
"You're my enemy
All that we had has gone away
There are times that fade away
But you'll still be my enemy"
— Fozzy, "Enemy"
Advertisement:

First things first, this is not the page for the funny Muppet bear. No, this is about the band. Fozzy is a Heavy Metal band fronted by the one and only Chris Jericho, whom you all may know as the popular, ripped, handsome, and multi-talented professional wrestler. The band started off as mostly a cover band; their first two albums feature mainly cover songs, while their next 3 feature all-original music. The band was formed in 1999 in Atlanta, Georgia. Fozzy plays a melodic style of metal, combining elements of alternative metal, hard rock, traditional heavy metal, and progressive metal, leaning the most towards the former two. However, most class the band as simply 'heavy metal'. The band's drummer and guitarist, Frank Fontsere and Rich Ward, respectively, were previously members of the Rap Metal group Stuck Mojo.

The band's name comes not from Fozzie Bear, but from a parody of Ozzy Osbourne's name; originally, the band was called Fozzy Osbourne. One year after the band's formation, they released their self-titled debut album. Due to Chris's time in WWE, the band often takes a few years to release albums. They have a bit of a following in the metal world, and have had a bit of commercial success. Their 2005 single, "Enemy", received radio airplay on about 80 stations country-wide. This was followed by Sin and Bones, their fifth album, which Chris claims to be their Black Album, referring to how he believes it will bring the band mainstream success as Metallica's 1991 album did.

Since the turn of the decade, Jericho has managed to split his time more efficiently as a musician and a wrestler, often taking large breaks between his WWE runs to work with Fozzy.