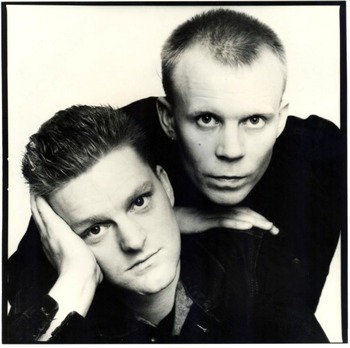 In 1985 keyboardist Vince Clarke, having firstly parted ways with Depeche Mode and then with his subsequent Yazoo partner Alison Moyet, took an ad out in Melody Maker magazine looking for a new singer to work with. Some 40 respondents showed up at the recording session, each performing two songs Clarke had written for the session. The second-to-last audition of the session was a shy young butcher named Andy Bell. As soon as Andy famously burst into falsetto on the chorus of "Who Needs Love Like That?", Vince knew he had found what he was looking for. They released the track almost immediately, and Erasure was born.

Bell was one of the first openly gay performers in the pop music industry, and his voice is regarded as one of the greatest in British soul. They are one of Britain's most successful pop acts, with five Number One albums and 40 Top 40 hits.

Although they are most commonly known today in certain circles as "The band that wrote the song to Robot Unicorn Attack".