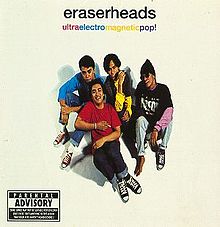 "...but there isn't anything in this album that your kids haven't heard before!"
Advertisement:

Ultraelectromagenticpop! is The Eraserheads debut studio album. Released in 1993, the album launched the Filipino version of Beatlemania, "Eraserheadsmania". This album had Silly Love Songs ("Toyang" and "Ligaya"), some rather moral songs ("Maling Akala"), and some more. It was the typical album of a pop rock band, but, this being The Eraserheads, this was just the start.

Most of the songs in this album were old songs made during and since the band's college years. In 1991, the band made a demo tape and brought it to various radio stations and record labels, but they got rejected every time. A professor and a friend from the band's college helped them in recording a better demo tape. Eventually, BMG Records got it, and they signed a three-year contract with the band, beginning the Eraserheads' music career as the Eraserheads.

Not to be confused with ultraelectromagnetic tops, by which the band got the name for their album.