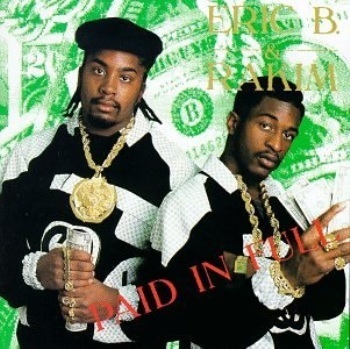 Check out my melody!
Advertisement:

Paid In Full is the 1987 debut album by Eric B. & Rakim. It's seen as one of the best Hip-Hop albums ever created and is historically important for using internal rhymes in the genre. It also upped the ante in terms of Sampling, which has been copied by countless hiphop albums ever since. In fact, James Brown even sued because of the unauthorized sampling of his music on the album. "Eric B. Is President", "I Ain't No Joke", "I Know You Got Soul", "Move the Crowd" and "Paid In Full" became hits.