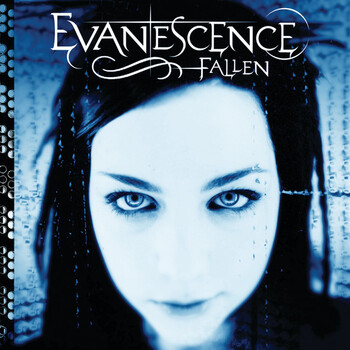 Fallen is the debut album by Evanescence. Released in March 4, 2003. Powered by the megahit single "Bring Me to Life" originally made for the Daredevil soundtrack, it debuted at #7 with sales of 141,000. Uncharacteristically for an album that debuted in the lower half, it did not fall off immediately like others do. Instead, it kept on selling, even reaching a new peak of #3 nine weeks after release. Ultimately, it spent a whopping 58 weeks in the Top 20 of the chart. That's to say nothing of its sales, which sold a whopping 7.5 million in the United States alone. Overseas, it fared even better, where its worldwide sales took it up to over 17 million. To put it in one way, it was the fourth best selling album of 2003.
Advertisement:

The album is hailed as a Nu Metal classic, and perhaps the swan song to nu metal's reign as a whole, as it died out not long after the release — this album and Meteora were the last big success stories of the genre in the mainstream. The Genre-Busting sound with female vocals made it appealing to all types of listeners — from hard rock fans, to indie listeners, to teenage girls (and boys). The Multiple Demographic Appeal showed in its success. As for the album itself, the aforementioned Genre-Busting really deserves to be mentioned, as people aren't sure what kind of genre to class it as. Alternative Metal, Nu Metal, Gothic Metal, Hard Rock, Pop, Alternative Rock and (bizarrely) Christian Rock and Emo have been tagged to it.

The lyrical themes typically deal with Angst — such as loss, heartbreak, and inner torment. The album was widely praised for making Hard Rock and Nu Metal accessible to pop listeners, something that few had done before. Singles include "Bring Me to Life", "Going Under", "My Immortal", and "Everybody's Fool".

This is the only album made by the original lineup of Amy Lee and Ben Moody. The latter left not long afterwards. It is widely viewed as their best album, and this has perhaps been a curse — they are commonly regarded today as a one album wonder.

Trope Me to Life