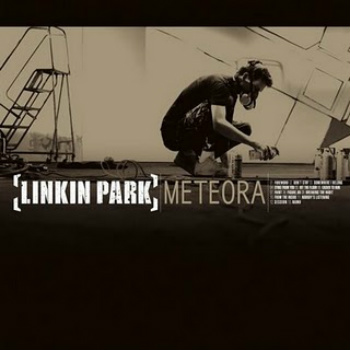 Meteora is the second studio album by Linkin Park released on March 25, 2003. The album continued the nu metal style established by their wildly successful debut Hybrid Theory, but also saw the exploration of other genres, most notably a blend of electronic music and alternative rock that they would explore later on in their career.

The album was a monster hit, producing five singles: "Somewhere I Belong", "Faint", "Breaking the Habit", "From the Inside", and "Numb". It is tied with Red Hot Chili Peppers' Californication for the album with the most weeks its singles have peaked at #1 on the Billboard Modern Rock Tracks. Critics praised the more melodic aspects of the songs and noted that the band straddled the Lighter and Softer themes with their characteristic angst very well.

However, it still wasn't quite the massive success that Hybrid Theory was, likely due to nu metal falling out of style. As a result, this would be their last album to feature nu metal, with its follow-up Minutes to Midnight going more for a U2-esque, arena-ready sound, while A Thousand Suns and Living Things continued their experimentation with electronics. They wouldn't fully return to their metal sound until The Hunting Party, 11 years later.

Doesn't have anything to do with a half-human-half-monster and rightful Princess of Mewni.