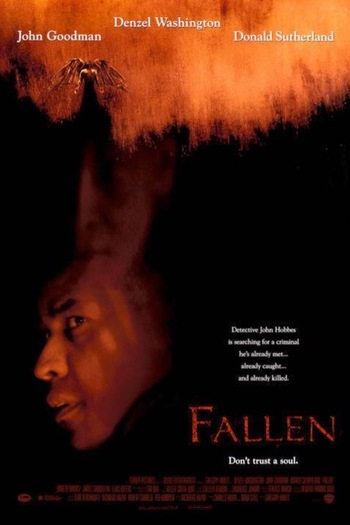 "Remember this, Hobbes... what goes around, really goes around."
Advertisement:

In Philadelphia, police detective John Hobbes (Washington) gains notoriety for capturing wily serial killer Edgar Reese (Elias Koteas). Immediately after Reese is executed, Hobbes is plunged into the case of another murderer who seems to be copycatting Reese with scary attention to detail.

However Hobbes's investigation soon leads him to discover that this is no mere copycat, as somehow Reese, or at least the evil that was inside him, has managed to survive the execution. Worse still, the demon is able to jump from one host to another, allowing it to kill at will and to terrorize Hobbes himself.

As the Battle of Wits between good and evil becomes increasingly personal for Hobbes, he must turn to a theologian's theories on demonology as his only hope for defeating this ancient evil.

This movie depends on a major Twist Ending. Proceed with caution.