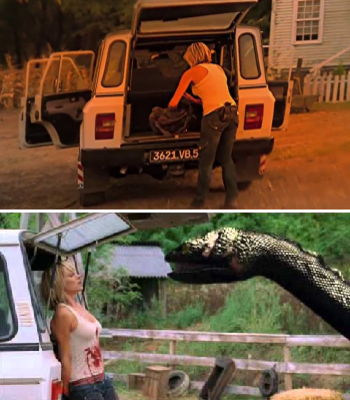 Probably the most common use of P.O.V. Cam. These are camera shots of the heroes from an angle that obviously is someone's point of view, presumably a stealthy attacker. To ensure that the audience realizes this, the shot is often taken at a strange angle, through shrubbery or shelving or some other form of cover. Also, we can frequently hear the attacker breathing. But the hero remains oblivious. The common subversions are that either the point of view comes from something harmless (it was a friend, or a harmless animal, or something); or that the character being stalked is completely aware of the threat and ready to respond with something like an Offhand Backhand, or just announcing "I know you're there."
Advertisement:

Approaching from the dark

Debby closing up on Vince under the veil of darkness

Approaching from the dark

Debby closing up on Vince under the veil of darkness