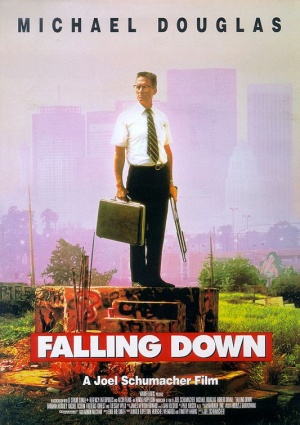 Falling Down is a 1993 film directed by Joel Schumacher about one man's mental breakdown, and his feelings of alienation, disgust, and mounting rage against what he perceives to be an increasingly unfair and depersonalized world, accumulating weaponry and becoming something like a vigilante as he travels across the city, shoving people out of his way.

William Foster is having a very bad day. William Foster wants to be reunited with his family and he's not going to stop for anyone in his path.

Meanwhile, Sgt. Martin Prendergast (Robert Duvall), on his final day before retirement from the Police Department, faces his own frustrations with reasonably civilized maturity even as he tracks the strange series of violent incidents happening that day, perpetrated by a mysterious man known only by the nickname "D-Fens".

This is a tale of urban reality and the adventures of an ordinary man...at war...with the everyday world, set against a backdrop of the LA riots and focusing on themes of violent rebellion against the system.

The film reportedly inspired the 1995 Iron Maiden song "Man on the Edge" and the creation of the one-episode character Frank Grimes from The Simpsons episode "Homer's Enemy". Received a parodic Homage in the Foo Fighters' video for "Walk