Film / The Family That Preys 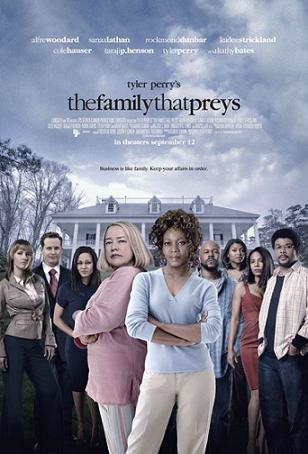 This 2008 movie written, directed and produced by Tyler Perry is about the inner workings of two families—one upper crust and the other working class—that become inextricably linked by scandal. Wealthy socialite Charlotte Cartwright and her dear friend Alice, a working-class woman of high ideals, have enjoyed a lasting friendship throughout many years. Suddenly, their lives become mired in turmoil as their adult children's extramarital affairs, unethical business practices and a dark paternity secret threaten to derail family fortunes and unravel the lives of all involved. There are a lot of spoilers here due to the nature of the movie.