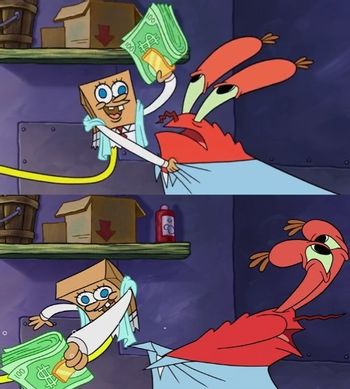 "What's the matter, Krabs? Ya' don't like money?!"
"When Judas, who had betrayed Him, saw that Jesus was condemned, he was seized with remorse and returned the thirty pieces of silver to the chief priests and the elders. 'I have sinned,' he said, 'for I have betrayed innocent blood.'
"'What is that to us?' they replied. 'That's your responsibility.'
"So Judas threw the money into the temple and left. Then he went away and hanged himself."
— Matthew 27:3-5, The Bible (New International Version)
Advertisement:

Everyone needs money, and some of us are lucky enough to have an abundance of money. Of course, money doesn't always buy happiness, and Greed unfortunately can be as common as the currency itself. Things happen and arguments about money can occur. While a screaming match or even Good Old Fisticuffs may take place, often someone may throw a bundle of cash into the face of their opponent as well as either party leaving, either on their own volition or otherwise.

Needless to say, this is a rather disrespectful act. Throwing anything in anyone's face is already rude enough, but having money is considered a status of power, and treating it with such disregard may be considered high treason for some. In some circles, the comparisons between this, Money to Burn, or Burning the Flag has not gone unnoticed.

Compare/contrast with Money Mauling (where the money is used as a weapon/projectile), Money to Throw Away (where someone usually tosses it around in a lighthearted and philanthropic manner), and Glove Slap (which has the same spirit albeit with a glove and usually as a manner to challenge another to a duel). See also Screw the Money, I Have Rules!, Screw the Money, This Is Personal!, Bitch Slap, Food Slap, Produce Pelting, and Shoe Slap which all have similar motivations albeit with varying threatening means or different physical actions/weapons.

Keep in mind that although cash is the most popular variant, loose change or checks/checkbooks can also apply here. Additionally, while this trope is mostly done in anger, there are rare times when throwing money in someone's face can be done in happiness or even delirium. Please remember that even though money flies into the face of another when doing this, it has little to do with "making it rain".

Cal tried paying off the first officer of the Titanic to let him onto a lifeboat, but in the moment of truth the officer throws the money back into Cal's face.

Example of:
Money Is Not Power

Cal tried paying off the first officer of the Titanic to let him onto a lifeboat, but in the moment of truth the officer throws the money back into Cal's face.