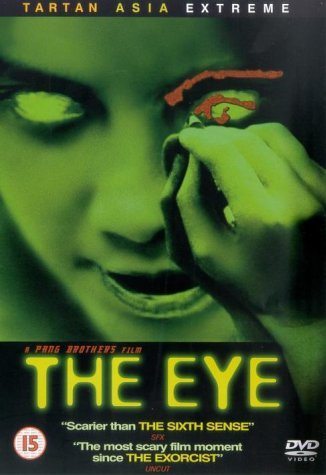 The Eye (aka Gin Gwai) is a 2002 East Asian horror film directed by the Pang Brothers, starring Angelica Lee. The film spawned three sequels (also by the Pang brothers), The Eye 2 (2004), The Eye 10, aka The Eye Infinity and sometimes referred to as The Eye 3 (2005) and The Child's Eye (2010). None of the sequels are connected story-wise, but share similar themes. There are three remakes of the first film: Adhu a 2004 Indian version, Naina, a 2005 Indian version (with the Pang Brothers completely uncredited) and The Eye, a 2008 US version starring Jessica Alba.

The first film centers around a Hong Kong violinist, Wong Kar Mun, who has been blind from a very young age, undergoing a cornea transplant to help her regain her sight. Although overjoyed at having her sight returned to her, her joy soon turns to terror when she begins to see ghosts, and a mysterious figure, whose presence seems to foretell strange deaths. After a terrifying discovery, she and her doctor's nephew (and her love interest), Dr. Wah, decide to investigate the truth behind these events, and also find out just who she received her new corneas from.

The second film follows the story of Joey (played by Shu Qi), who, after a failed suicide attempt, discovers that she is pregnant. She soon learns that attempting suicide while pregnant has granted her the ability to see ghosts. This, along with her estranged boyfriend's distant behaviour, only serves to make her more miserable, but, when she starts being followed by the spirit of a sinister-looking woman and discovering the ghost's motives, she faces a desperate struggle to save herself and her unborn child.

The third film follows the story of five teenagers who read from a book detailing ten different methods for seeing the dead. (Hence, the 10 in the film's title.) They decide to play the book's game, but, once it starts, they must finish it, or forever be haunted by ghosts.