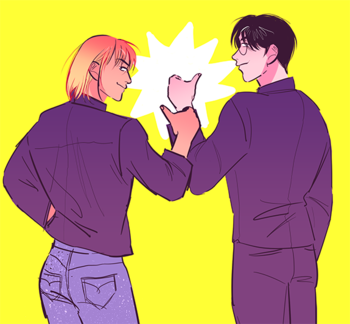 is an ongoing drama webcomic by baramasala (also known as boniae) that was launched in April 2014.

Set in 1995 Yokohama, the comic follows Kazuhiro Tsuchiya who now leads his deceased brother's legendary gang, the Four Corners. Kazuhiro is approached by Hideki Yuhara, a schoolmate who claims to have vital information that Kazuhiro should be wary of. The two unlikely delinquents pair up to figure out the reason as to why gangs in the city are being brutally eliminated...though the unraveling of the mystery is darker than it appears. How far will Kazuhiro and Hideki go to rest their case?

Four Corners can be read on smackjeeves

, and the work can be supported via the creator's patreon