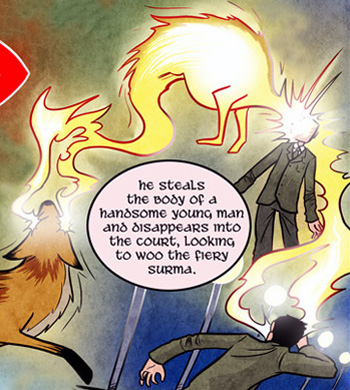 "By concealing yourself in the flesh of your enemies you can constantly escape detection while committing countless evil acts. The different bodies will keep the authorities guessing, and when you get bored you can simply shed your current skin and move on to the next. There is also a great deal of fun to be had with tormenting heroes with this fashion. Consider, 'Mom, is that you?'"
— How to Be a Villain, Neil Zawacki
Advertisement:

Some Body Snatchers simply have no patience.

Maybe they're committing Grand Theft Me, only to find that they're quickly wearing their new bodies out. Maybe no one person they possess has all the skills they need. Maybe they have no idea who's good to take over until they've done so. Maybe they're afraid of being found if they stay in one body too long. Maybe their preferences for a pleasurable existence tend heavily towards being Allergic to Routine. Or maybe they're just plain nuts. In any case, when a Body Snatcher is constantly switching from body to body, they are said to Body Surf.

Naturally, this makes them hard to catch. If this is done in a closed environment, you get a Ten Little Murder Victims scenario — only the identity of The Mole changes, making things considerably harder for the heroes. Of course, it's considerably harder for the villain, too, who had better be a really good actor if people aren't going to be able to quickly tell who is Not Himself.

How this is done depends on if the surfer is corporeal or not. If it is, it may leave one victim as a Chest Burster or Orifice Evacuation, and enter another through Orifice Invasion. If not, it could move through bodies freely, or be limited in some way, such as requiring the new body to touch the old one.

Not to be confused with the move of the same name in [PROTOTYPE], wherein you surf using a body. Nor it is related to Body Sled. Or Crowd Surfing, for that matter.

Compare and Contrast Body Backup Drive, where the target body usually isn't occupied when the new host moves in.