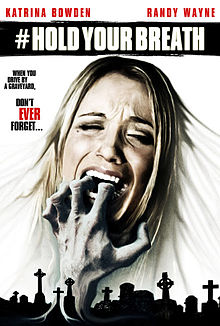 Hold Your Breath is a 2012 horror film by The Asylum. Seven kids, formerly friends in high school, head off on a camping trip together. While on their way, they pass a graveyard, one of them fails to hold his breath, and they accidentally inhale the spirit of a mass murderer, Klaus Van Hausen. Possessing one teen after another, he goes on a murderous rampage which can only be stopped by one man.
Advertisement:

Not to be confused with Don't Breathe.