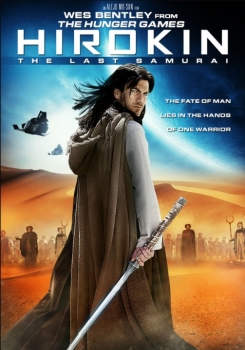 Hirokin: The Last Samurai (or Hirokin) is 2012 Direct-to-Video film written and directed by Alejo Mo-Sun and starring Wes Bentley.

The titular character, Hirokin, is, strangely enough, the last samurai, and so sets out to fulfil his destiny and... that's about it. His wife is called Orange and is played by Jessica Szohr. The Big Bad people in charge are alien racists and want to kill Hirokin and his family in the most gruesome and twisted way possible. This doesn't happen. Not much does, really.

Basically, it's The Hunger Games on Tatooine, with a really confusing (and rather tedious) plot but without a happy ending.

Not to be confused with The Last Samurai.