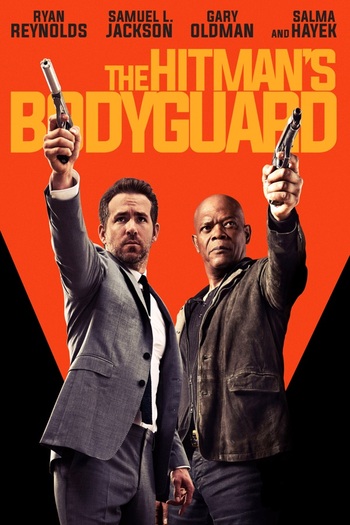 Everyone's out to get them... If they don't kill each other first.
"You're terrible at almost everything, but you're good at keeping people alive. Keep him alive... please, and you get your dream life back."
— Amelia Roussel
Advertisement:

The Hitman's Bodyguard is a 2017 action-comedy directed by Patrick Hughes. It was released on August 18th, 2017.

After a botched mission, Michael Bryce (Ryan Reynolds) loses his status as one of the world's premiere bodyguards. Now down on his luck, he finds a lifeline when Interpol agent Amelia Roussel (Élodie Yung) demands that he escort one of the world's most notorious hitmen, Darius Kincaid (Samuel L. Jackson) to the International Court of Justice. His testimony against a ruthless dictator charged with crimes against humanity, Vladislav Dukhovich (Gary Oldman), will allow Darius' wife Sonia Kincaid (Salma Hayek) to be released from prison. This causes Dukhovich's assassins and corrupt politicians to set their sights on Michael and Darius, who must team up, even if they hate each other and wouldn't mind seeing the other die, preferably at their own hands.

A sequel titled The Hitman's Wife's Bodyguard was released on June 16, 2021.

The Hitman's Bodyguard contains examples of:

"You fucked up. When you shot. My. Bodyguard."