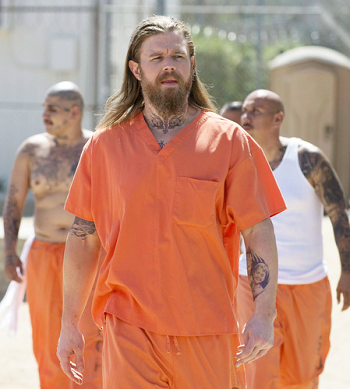 "Just a young boy, born to a life of poverty
Hustlin, robbery, whatever brung the paper home
Carried the chrome like a blind man hold a cane
Tattoos all over his chest so you could know his name"
— Dead Prez, "Behind Enemy Lines"
Advertisement:

Tattoos have a long history and have over the millennia been signs of different social classes, from royalty to the rags. In more recent times, they have become associated with criminals, sailors, and criminal sailors. In fiction, a tattoo can act as a shorthand for "criminal", and at times it's not that far off. Organised crime from The Yakuza to Gangbangers have their own codes, and prisoners tell their life stories in pictures.

The attitudes towards tattoos have during the past decades softened, and many old pirate and prisoner tattoos have been adopted into the general lexicon of tattoos, prime example being the spider web, which depending on the bearer might have meant drug addiction, incarceration, or killing a minority, but is now a fashion accessory.

Still, the stigma with the past backgrounds makes tattoos also popular with rebel types. Even the Rule-Abiding Rebel — or especially the Rule-Abiding Rebel, since it does not actually require committing illegal acts to look rebellious. There is still extreme stigma related to tattoos in Japan, as they are still closely associated with the Yakuza to this day. A tattoo is still a common visual cue in Japanese media for a character of dubious morals or simply a Delinquent.

This could be regarded as an Evolving Trope; as tattoos went into mainstream fashion during The '90s, the crooks took their tattoos Up to Eleven; see Tattoo as Character Type. If a group of crooks has a defining tattoo, see Group-Identifying Feature.

May be Embarrassing Tattoo when a crook goes straight. In futuristic settings, a Barcode Tattoo may be an Orwellian variety.

A convict with a record featuring murder, mass-destruction, grand larceny and all manner of other crimes, Jack is recognized by her tattoos - which can be found quite literally all over her body.

A convict with a record featuring murder, mass-destruction, grand larceny and all manner of other crimes, Jack is recognized by her tattoos - which can be found quite literally all over her body.