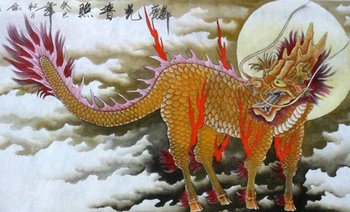 I was awed to tears at the mere sight of my first ki-rin, and I've met gods.
—Volo, Volo's Guide to Monsters
Advertisement:

Kirin (or qilin, girin, ghilen, kylan or others, depending on the translation and language of origin) (the first name is pronounced as "chee-leen"), also called "Eastern unicorns," are a type of mythological creature found in Chinese, Vietnamese, Korean and Japanese folklore, and which have since percolated into Western media as well. They typically resemble ungulates — usually horses, deer or oxen, sometimes giraffes — with draconic traits such as fangs, reptilian scales or dragon heads. They may have a single horn or antler in the center of their foreheads, or they may have two in the usual arrangement.

Kirin are typically considered to be benevolent, heroic or outright holy beings. They are usually depicted as having a strong sense of justice, which, combined with their supernatural ability to detect whether someone is guilty or innocent of a crime they are accused of, makes them legendary — and merciless — judges. They are often characterized as crusading sorts, roaming the land looking for evildoers to punish and wrongs to put to rights. They are occasionally treated as omens, with the appearance of a qilin/kirin foretelling the birth of a king, sage or hero.

A very common power attributed to kirin is Flight, despite them never being depicted with wings, and sometimes the ability to Walk on Water. In early myths, this is due to their unwillingness to harm so much as a single blade of grass, and thus using their magic to run on the air and water where they will not tread on any living thing.

As a result of their mythological origins, kirin are particularly likely to appear when the story visits the Far East, Wutai and associated areas, although they can and do of course appear elsewhere. They are often associated with or linked to the Western myth of the unicorn, due to general similarities between the two — magical horse-like ungulates, good and holy, with sometimes a single horn — although most works still treat them as at least somewhat distinct things.

There is also the term "huolin/kakurin" (lit. Seizing Bright), which refers to an instance where one was seen hunting a kirin in the wild never to be seen again, especially with the only evidence of this being the said hunter's last written works abruptly ending with no indication of continuing. Thus, this term is often synonymous with "one's final moments" in that something so mysterious happened to end their life on the spot without a second thought.

In modern Japanese and Korean, kirin and girin, respectively, are the usual words for giraffe. This is an influence of Chinese, which did a cultural translation dating back to the Ming dynasty, when Admiral Zheng He brought a giraffe from East Africa to China. In modern Chinese itself, however, using qilin to refer to giraffe is considered archaic, the word having been replaced by the neologism changjinglu (lit. "long-necked deer").

See also Dragons Are Divine, Our Dragons Are Different, Mix-and-Match Critters and Youkai. Compare Unicorn and The Marvelous Deer. A kirin is also regularly included as one of The Four Gods, typically replacing the White Tiger or the Yellow Dragon.

Chirinmon, the ultimate form of Kudamon, is based on the mythological kirin

Chirinmon, the ultimate form of Kudamon, is based on the mythological kirin