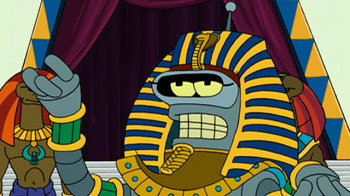 Like he won't rust on the first reign-y day.
"A heavily industrialized 20th century-type planet very much like Earth; an amazing example of Hodgkin's Law of Parallel Planet Development. But on this Earth, Rome never fell."
— Captain's Log, stardate 4040.7 (Star Trek: The Original Series "Bread and Circuses")
Advertisement:

A sort of three-way cross between Fantasy Counterpart Culture, Inexplicable Cultural Ties, and Planet of Hats, a Space Roman society is a human or Human Alien culture that, in an amazing coincidence, resembles a culture from Earth's history. This trope does not exclusively describe only those based on Rome, but any implausibly Earth-like society. Space Romans provide a handy way for the beleaguered writer to populate the galaxy with a variety of different, believable alien societies, but disbelief can easily be stretched to its limit if the writer isn't careful, or doesn't consider how the culture in question would be altered by being transplanted to space.

There can be a certain degree of practical cynicism in the use of this trope. In older film and TV portrayals, especially ones on tight budgets, these kinds of societies might crop up as a way to have something different and sort-of sci-fi that week, while at the same time recycling stock props and costumes from other shows. It also takes a lot less creative time effort to use off-the-peg "Romans in Space" than to build a convincing alien society and aesthetic from the ground up.

This is usually less offensive than Space Jews, who are inspired by ethnic stereotypes instead. See also United Space of America. Compare with Days of Future Past, in which a society on or originating from Earth revives an older culture in whole or in part. Contrast with Culture Chop Suey, where elements of several cultures are blended together.

Two common variants are the Space Amish, a society of technological dropouts, and the Space Cossacks, rebels and/or exiles from mainstream society.