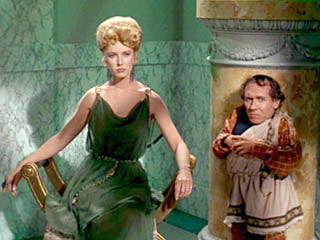 Philana either not noticing or not caring about the "I hate you all" look on Alexander's face.
Advertisement:

You guys have been looking forward to this, haven't you?

This episode was absolutely crazy, packed with zany antics and veering from serious to silly in a heartbeat. It is second only to "Spock's Brain" as a perfect example of the Seasonal Rot Star Trek started to show in the third season.

And yet, it is also a landmark episode, not just of Star Trek but of American television, as it is one of the very first times (and, depending on how you tally it, possibly the first time) a black woman and white man were shown kissing on broadcast network television. Even though Aliens Made Them Do It.

The ep starts with our Trio beaming down to Platonius to answer a distress call. They are greeted by a giant shadow, but before you can say "Be vewy quiet", they find the owner of the shadow is a dwarf called Alexander. It seems Parmen, the leader of the Platonians, has suffered a severe infection from a simple paper cut and is near death. Bones treats him. It is soon learned that the Platonians have many abilities. Their gift of telekinesis, extending as far as the orbiting Enterprise is the most obvious. They also have incredible longevity and mental capacity. Unfortunately, they have very weak immune systems, small wounds becoming infectious very quickly. They tell Bones that they would like him to stay. Bones respectfully declines, only to learn that this was not an invitation. The Platonians are going to keep Bones with them and will make a puppet show with his friends until he agrees to stay.