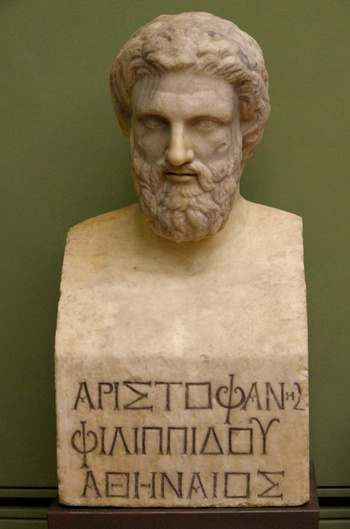 The face behind the play that led to the death of Socrates.
Brekekekéx-koáx-koáx
The familiar chant from The Frogs
Advertisement:

Aristophanes was an Athenian comic playwright (5th-4th century BC). His works are often characterized as satire, which is quite remarkable—the Greeks never really went in for satire that much, to the point where they didn't even have a word for it (the genre was considered to be an innovation of the Romans, who were rather fonder of the style).

His notable plays include The Clouds (Νεφέλαι, Nephelai), which famously lampooned Socrates (libeling him, and likely contributing to his sentence of death); The Wasps (Σφῆκες, Sphékes), a satire of contemporary litigious society; The Birds (Ὄρνιθες, Ornithes), which features the original Cloudcuckooland; Lysistrata (Λυσιστράτη, Lysistraté), in which the women of Greece bring about the end of a war by going on a sex strike; and The Frogs (Βάτραχοι, Batrachoi), in which Euripides and Aeschylus contend in the afterlife for the title of Best Tragic Poet. (Many of his plays, in what was then a common convention, were named after the role adopted by the Greek Chorus; Lysistrata, named after the lead character, is the only exception out of those listed here.)

There is also a large number of known plays by Aristophanes that are now lost.

The Frogs was loosely adapted into a musical by Stephen Sondheim et al., with William Shakespeare and George Bernard Shaw as the contentious dramatists, and a much-expanded role for the frogs.

Surviving works by Aristophanes with their own trope pages include:

Other surviving works include:

Other works by Aristophanes provide examples of: