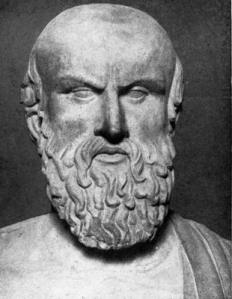 "With regard to the simplicity of his dramatic composition, if one were to judge him in relation to the playwrights who succeeded him, one would find him unsophisticated and lacking elaboration, but if one were to judge him in relation to those who preceded him, one would marvel at the poet’s ingenuity and inventiveness. Anyone who thinks that Sophocles was the more perfect tragic poet, is right to do so, but should consider that it was far more difficult for a playwright who succeeded Thespis, Phrynichus and Choerilus to bring tragedy to such greatness than for a successor of Aeschylus to reach even the perfection of Sophocles."
— Anonymous, Life of Aeschylus
Advertisement:

Aeschylus (Αισχύλος, Aischylos, circa 525/524 – circa 456/455 BC) was an ancient Greek playwright from the 5th century BC. He is the earliest Greek tragedian whose plays have survived to the present.

He wrote at least seventy dramas, seven of which survive, and five satyr plays, none of which did. Of his seventy plays, he won first prize for thirteen of them in the Dionysia (an ancient Greek festival that honored Dionysius. The central events were the performances of plays). He is credited with several major innovations in writing for the stage at the time, like the practice of having multiple actors with speaking parts. Previously, the usual format had been to have a Greek Chorus telling the story, with a single actor playing the parts of individual characters, swapping between them as required. The addition of a second actor opened up the dramatic possibilities; with two speaking characters on stage at a time, characters could for the first time be shown interacting with each other.

Aeschylus also served as a soldier during the Persian Wars, partaking in the battles of Marathon and Salamis (possibly Plataea as well). His oldest surviving play, The Persians, is set during the Wars; it is said to have been modelled from Phrynichus' tragedy The Phœnician women played four years before.

He is said to have died when an eagle dropped a tortoise on him from a great height, thinking that his bald head was a stone that would crack the tortoise open.

Of the seven extant plays, Prometheus Bound was traditionally attributed to Aeschylus, but its authorship is in doubt. However, the issue of Zeus' characterization can be reconciled with Aeschylus' authorship by evidence that the Prometheia (the full cycle) involved character development for Zeus.

Works by Aeschylus that don't have their own trope pages provide examples of:

"For chariot on chariot, corpse upon corpse, horse upon horse had been heaped in confusion."