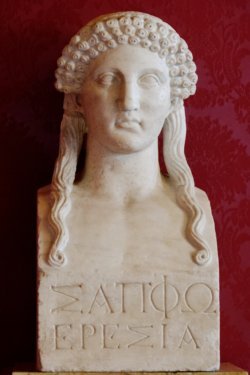 "Some say the muses number nine—
How careless!
Behold, Sappho of Lesbos: the tenth."
—attributed to Plato
Advertisement:

Sappho (c. 630-570 BC) was born on the Greek island of Lesbos, about 2700 years ago. It's hard to overstate her reputation in the ancient world: she was on the Greek curriculum of classics for a thousand yearsnote William Shakespeare: 400 years so far, and there's basically no reference to her that isn't along the lines of "is completely fucking awesome".

Sappho's back catalog is subject to one of history's more heartbreaking cases of Missing Episodes: she left at least nine volumes of poetry... of which one complete poem survives. So do about two hundred fragments, some as short as a single word. She was dropped from the standard classical curriculum during the Byzantine era (ca. 6th century AD), possibly because her dialect of Greek was considered archaic and difficult by then.

These days, Sappho isn't known so much for her poetry as for her association with female homosexuality: her native island, Lesbos, is the source of the word "lesbian"; for which "sapphic" sometimes turns up as an archaic synonym.

Due partly to the loss of her work, hardly anything is known of her personal, let alone sexual life, and some scholars doubt that her poems are even meant to be autobiographical—but there is no reason to assume they were not, either. All that is certain is that the fragments where the gender of the beloved is specified all identify her as female. And that Sappho herself was one of the most important poets who ever lived, and arguably the Trope Maker, or at least Trope Codifier, for many of the concepts of romantic love in western culture.