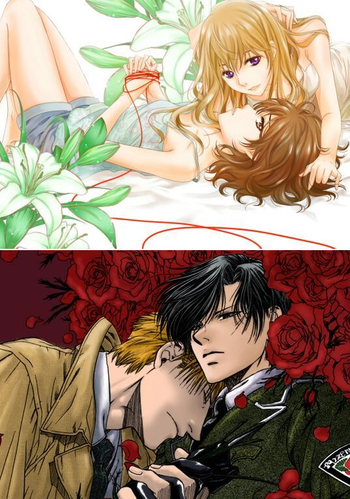 This convention has its origins in the work of the Greek poet Sappho, widely considered the most famous historical lesbian, her name and homeland giving us the terms sapphic and lesbian.

Generally speaking, colors in the West that have long been symbols of decadence have been co-opted by historical homosexuals to express their sexuality.

This trope may be expressed through potential lovers giving actual flowers to their lover, but it can also be symbolic. That is, a character could be (1) nicknamed Violet or Lily (or variants such as Viola or Liana, etc.), (2) frequently seen near lavender or violets (etc.), or (3) exceptionally fond of wearing the colors associated with those flowers (e.g. purple, lavender, green). That said, this trope often emphasizes homosexuality or queerness. Thus, Ho Yay may be made actual subtext with this symbolism, but merely the presence of these symbols does not constitute the subtext. Merely being named Violet, for example, does not mean the character is LGBT, and thus would not be an example of this trope without more context.

Subtrope of Flower Motifs and Homoerotic Subtext. A sister trope to Something About a Rose and Fleur de Lis, which concern roses and lilies respectively when they don't symbolize homosexuality. Can be expressed through Flowers of Romance, Garden of Love, Floral Theme Naming, Flowers of Femininity, and Hanahaki Disease. Compare Four-Leaf Clover as a luck symbol. See also The Poppy, which is worn in remembrance for the dead of World War I.

"I should like you all to know,
I'm a famous gigolo,
And of lavender, my nature's got just a dash of it.
As I'm slightly undersexed
You will always find me next
To some dowager who's wealthy rather than passionate."
—Cole Porter, "I'm A Gigolo" (1929)

In the West, purple has been associated with royalty since the time of the Romans. From this association, the color became associated with decadence, and it is from this connotation that the color has a connection to homosexuality. Namely, during the time of the Industrial Revolution, the arts were associated with decadence, and the men interested in the arts were viewed as unmanly. The decadent purple was replaced by the paler lavender to symbolize the unmanly interests of the time, and it is a short step from this connection with effeminate men to a connotation of homosexuality.

When the lesbian community used violets as a symbol of pride in the 1920s, they also used lavender to express their protest. It wasn't until the 1950s that the flower, and the color, became firmly associated with the LGBT community at large, only to be replaced by the pink triangle as the most popular symbol for gay pride.

Nowadays, "lavender" is used to directly associate something with homosexuality, such as "lavender linguistics," for the socio-linguistics of the LGBT community, or "lavender graduation," for an LGBT-specific graduation ceremony. The term "lavender revolution" is even synonymous with the gay rights movement.

"Rejoice, go and
remember me. For you know how we cherished you.
But if not, I want
to remind you
[...] and beautiful times we had.
For many crowns of violets
and roses
[...] at my side you put on"
— Sappho, Fragment 94, as translated by Anne Carson

Common violets (Viola sororia) are often associated with lesbians and romantic love between women. This symbol originates from Sappho, who may have used violets frequently in her love poems to women. The scientific name, sororia, derives from the Latin soror, for sister (more here

The symbol of violets for lesbianism was popularized by the 1926 French play La Prisonniere ("The Captive"), in which a lesbian expresses her love for another woman by leaving nosegays of violets for her. After police shut down the Broadway run of the play, marching onstage in the middle of a performance to arrest the two leads, lesbians and bisexual women began wearing violets in protest.

Within the Yuri Genre, lilies symbolize romance between two women. In fact, the word "yuri" (ゆり) translates to "lilies" in English. The term, and therefore the symbol, originates from a 1976 magazine article titled "Yuri." A notable difference between the use of, say, violets and lilies is that "yuri" as a term for lesbianism is a "softer" term than the literal translation of "lesbian" ("lezu") and connotes romance rather than lust.

That said, lilies in Japan symbolize more than one thing, much like roses symbolize different things in English-speaking countries depending on the color and context of the gift. In general, the white lily symbolizes chastity and purity, hence why it might be a softer term for lesbianism.

The green carnation began as a symbol for Oscar Wilde and his followers. In 1892, he had one of the actors in Lady Windermere's Fan wear a green carnation on opening night, and many of his younger followers wore them as well. There even was a parody of Wilde published in 1894 titled The Green Carnation. It is likely that Wilde chose a green carnation because of his belief that nature ought to imitate art, and not the reverse. Since a green carnation does not come from nature, it embodies the unnatural. This is how the flower implies homosexuality, though Wilde never made such a direct admission.

The Bara Genre owes its name to the Japanese word for rose, "bara" (ばら). As a symbol for gay men, the rose became popularized by the publication of Barazoku in the early 1970s. However, the idea for the symbol originates in Greek Mythology, specifically deriving from myths of King Laius having affairs with boys under rose trees. "Barazoku" means "rose tribe" and is a slang term for homosexual men, much like how "yurizoku" or "yuri" ("lily tribe" or "lily") is for lesbians.

That said, roses in the West symbolize many things depending on the color and placement of the flower. In general, a rose symbolizes romance, and it should be noted that examples of roses symbolizing anything other than homosexuality are better suited for Something About a Rose.

Since 2001, the Mexican bisexual flag

◊ uses the trillium flower as its symbol, and Michael Page,

in 1999, suggested using it for this purpose as well. This flower belongs to the same family as the lily, and scientists first used the word "bisexual" in reference to these flowers — what with their having both male and female sex organs.