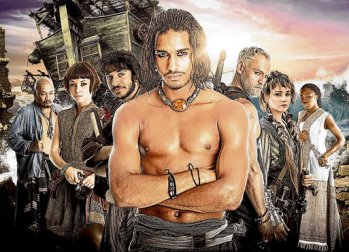 Sinbad is a British action-adventure fantasy series that premiered on July 8, 2012 on the channel Sky1, and was picked up by the Syfy channel in June of 2013. It was cancelled after one season. The show is based off the famous tale of Sinbad the Sailor.

The series follows the titular Sinbad as he starts a new life as a sailor, as penance for accidentally killing a man in a fight and getting his brother Jamil executed. Having been cursed so that he will die if he remains on land for longer than 24 hours, Sinbad must brave the unknown dangers of the seven seas. Of course, joining him on his journey is a Ragtag Bunch of Misfits: Anwar, a clumsy but lovable medical student; Rina, a tiny thief that’s only looking out for herself; Gunnar, a big guy from the far north; and Nala, a beautiful African aristocrat. And Cook. They are later joined by the bounty hunter Tiger.

However, Sinbad’s past comes back to haunt him as the father of the man he killed tries to track him down, doing whatever it takes to get revenge, no matter the cost.

. Not to be confused with the 1990s series The Adventures of Sinbad or the 2003 DreamWorks animated movie Sinbad: Legend of the Seven Seas.