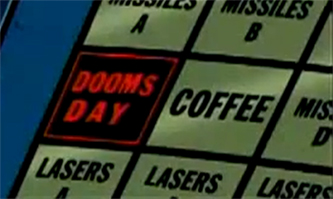 Arabica or annihilation?
"The self destruct is over there, next to the A-C options. I guess don't press that either."
— Frank,

Everyone needs a good Doomsday Device or Self-Destruct Mechanism. You never know when you're gonna need them. But, where is this button going to be placed? It has to be somewhere that is easily accessible. So, it's placed just right on the side of the keyboard, where nothing could possibly go wrong.

That is, until, it just gets accidentally pushed while someone's typing.

Therein lies this trope. A button or switch of massive power is placed so carelessly that it almost begs to be accidentally hit. Often, this is done on a keyboard, but it can be done in other locations as needed for the storyline. This can be done, most likely for laughs, intentionally or unintentionally.

Closely related is Forbidden Chekhov's Gun; sometimes the device itself has a function so dangerous that if you actually need to use it, you won't have time for a Two-Keyed Lock; when Godzilla shows up, having to wait for the other guy to get through traffic to help you activate the mega-death ray means the monster vaporizes the city. Still, it's probably a good idea to put a molly-guard

over the Big Red Button.

A subtrope of Schmuck Bait. May overlap with Inventional Wisdom.