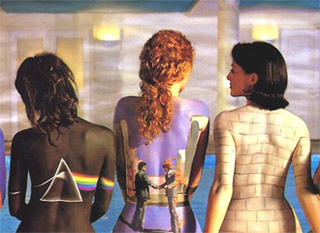 A whole new meaning to "back catalogue".
"I didn't feel naked."
— Rebecca Romijn-Stamos (on her Mystique "costume" in X-Men)
Advertisement:

People for whom their body is their canvas... literally. Older Than Feudalism as there's evidence for body painting in ancient Roman historical documentation. The complexity of designs can range from a single color all over, through designs and patterns, pictures and artwork to even paint so detailed and accurate that the person looks like they're wearing clothes.

Most commonly seen painted on attractive women for added Fanservice, or on fanatical sports fans, especially when the weather is inappropriate to be wearing only paint, to show their devotion to their team.

In real life, full-body suits like this on models and actors can often take far longer to apply than most makeup sessions (which, as any actor can attest, tend to be long to begin with), often twelve hours (or more), and take a great deal of patience from the models themselves.

Contrast Painted-On Pants, where the clothes are just so tight they look painted on, and Form-Fitting Wardrobe, which is the next step up.

See also This Means Warpaint, a subtrope of this.

The brothers try to mask their internal organs with paint (don't ask, it's a long story).

The brothers try to mask their internal organs with paint (don't ask, it's a long story).