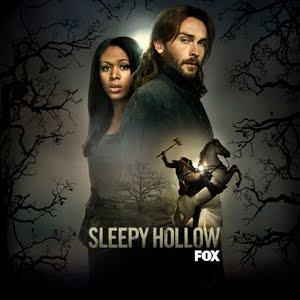 "And there before me stood a white horse, and its rider held a bow, and his name was Death."
Advertisement:

In the series, Ichabod Crane is brought back to life 250 years in modern day Sleepy Hollow after dying during a mission for General George Washington in 1781. Crane learns the Headless Horseman, whose head Crane chopped off before his perceived death, has awakened as well, beginning his nightly killing spree after just murdering Sleepy Hollow’s sheriff. In order to bring down the Horseman, Ichabod Crane partners with Lieutenant Abbie Mills, who’s investigating the Horseman after he kills her partner, the (former) sheriff.

While hunting said Horseman, Abbie looks into the old case files the sheriff was investigating and learns there exists two types of occult groups, one being evil and the other good, which may have summoned the Headless Horseman and if the Horseman isn't stopped, dark supernatural forces will affect Earth. Unfortunately, stopping this entity proves difficult as he discovers modern weaponry, which he assimilates into his ritualistic hunt and it’s revealed to be Death, one of the Four Horsemen of the Apocalypse as described in the Book of Revelation.

Ichabod Crane not only has to solve a mystery from his own time involving the Founding Fathers and their involvement with the supernatural phenomena of Sleepy Hollow but he must adjust to the societal and technological differences of the 21st century. Given the fact that he is, and states he is from, the time of the American Revolution, local law enforcement see him as a madman but reliable in hunting the Headless Horseman.

In the fourth season, the show was heavily retooled, with Ichabod being transferred to Washington DC where he joins Agency 355, which was founded by George Washington to fight supernatural threats.

This is not to be mistaken for the 1999 Tim Burton film of the same name.

It now has the beginnings of a recap page.