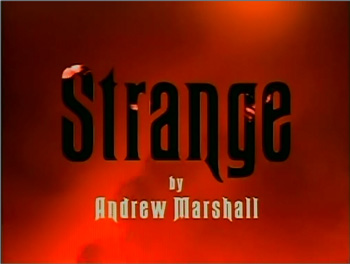 Strange is a British TV drama following the exploits of John Strange (Richard Coyle), a former priest who hunts demons. Out to thwart Strange is the sinister Canon Black (Ian Richardson), who had Strange de-ordained for his beliefs (and its associated "unpleasantness"), and who represents the sober face of the Church of England, engaging in cover-ups and persistently denying the existence of evil powers. The drama takes place in "A Cathedral City somewhere in England".

Helping Strange to detect and unmask demons are:

Strange also finds an ally in Jude Atkins (Samantha Womack), a nurse who works on the stroke ward at the local hospital, and who was previously a research scientist.

The programme comprises a one-hour pilot originally aired in spring 2002, followed by a series of six one-hour episodes aired in summer 2003. Alas, it was rather Screwed by the Network in that the BBC did not repeat the pilot when the series aired over a year later, doubtless leaving many viewers confused as to who the main characters were. Added to which, its Saturday evening timeslot moved about from week to week. The resultant low viewing figures meant that although a second series had been planned, it was not commissioned.