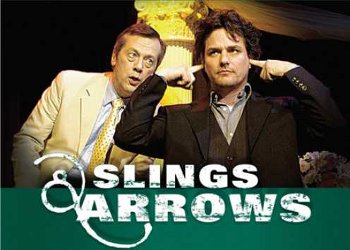 Please shut up, Spirit Advisor.
"I am not collaborating with the spirit world on a production of Macbeth."
— Geoffrey Tennant, to his deceased mentornote shortly before they begin collaborating.
Advertisement:

Slings & Arrows is a 2003–06 Canadian dark comedy about the New Burbage Festival, a thinly-veiled Fictional Counterpart of the Stratford Festival of Canada. It focuses on Geoffrey Tennant's return to the festival as artistic director upon the death of his estranged mentor, Oliver Welles (who immediately returns as a ghost visible only to Geoffrey).

Each season is a Story Arc, focusing on Geoffrey's production of a great Shakespearean tragedy: the first season does Hamlet, the second Macbeth with a subplot about Romeo and Juliet, and the third King Lear.

and
Ellen: What do you want me to do, ask her to leave?
Geoffrey: Yes! Now! Please!