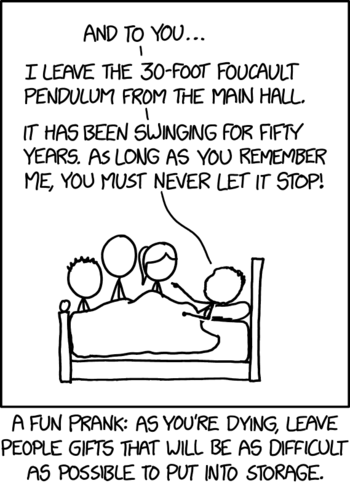 "And finally, to my Lawyer, who has helped me on this will, I leave not a boot to the head, but a rabid Tasmanian Devil, to be placed in his trousers?!...AAAUUUUUUGH!"
— The Frantics, Last Will and Temperament
Advertisement:

A will that contains ridiculous bequests, strange conditions and other weird oddities. This type of will often contains demeaning, cumbersome tasks to earn the fortune and might openly insult the inheritor. The inheritors are usually people you wouldn't expect to receive the inheritance, such as strangers, unknown relatives or even pets. The will may also contain bequests that no one would ever want or need. Sometimes, however, a twist will be used to make the bequeathed gift only look useless at first but turns out to contain something more valuable.

While not an everyday thing in the past, it was still not uncommon. Not really seen nowadays, as judges, juries, and probate courts are much less willing to put up with nonsensical bullshit that people try to sneak into their wills.

See also On One Condition and Bury Me Not on the Lone Prairie, which often overlap with this. The Spiteful Will can be silly but is more often Played for Drama rather than laughs.

open/close all folders
Comic Books
Fan Works
Film
Advertisement:
Literature
Live-Action TV
Miss Brooks, on the other hand, is bequeathed the contents of Mr. Casey's treasure chest. This turns out to be his widow Mrs. Casey and their five kittens.

Miss Brooks: Contrary to public opinion, Mighty Casey did not strike out!