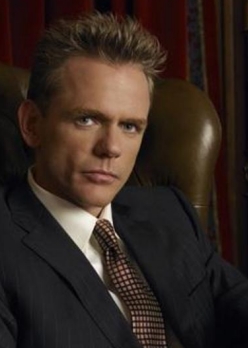 "If there was a fuck-up Pope, I would have a three-foot hat."
"'Dysfunctional.' I'm not dysfunctional. I'm evolving to the next level."
Advertisement:

Christopher Todd Titus (born October 1, 1964) is a comedian who has done work in many different areas of entertainment, but primarily in Stand-Up Comedy. Born in Newark, California, he began stand-up at the age of 18 with a simple gag he did at his high school about how to properly throw freshmen into the garbage can.

His experiences growing up were on the extreme end of what most people would consider "dysfunctional."

His father, Ken Titus — who worked in sales and spent some time in the National Guard — was a hard-drinking, chain-smoking womanizer with a string of failed marriages note married six times, divorced five times, and slept around near-constantly that each ended with Ken getting cleaned out of everything he had and constantly fighting for custody of his children. He used Tough Love (that sometimes bordered on self-esteem-crushing sadism) to set Titus and his brother Davenote Who was actually the son of Ken's third wife and stuck around the Titus household after the divorce. Although Ken never formally adopted him, Dave was always a part of the family. straight. Somewhat exempt from Ken's unique parenting style was Titus' sister Shannonnote Who lived with Titus' mom and was there when Titus' mom murdered her abusive second husband during Thanksgiving dinner in 1986. Titus also had a few other step-siblings thanks to Ken's multiple marriages. Titus has gone out of his way to try and show that Ken was never neglectfulnote Titus' mother abandoned him with her parents and used Ken's alimony and child support on booze. Dave's mother simply let him stay with Ken with little argument. and went to great lengths to provide for his children. It's just that the loving and playful side of Ken's personality disappeared the moment he cracked open his first beer of the day. Luckily, the two of them were able to work through their issues and enjoyed a healthy relationship toward the end of Ken's life.

His mother Juanita (Ken's second wife; maiden name Holmes) was a concert pianist, spoke four languages, was a Supreme Chef (especially around Thanksgiving), had an IQ of 180 and competed in so many beauty pageants that she qualified for Miss California back in the 1960s. Despite her high intellect, stunning beauty, infectious charm and amazing talent, she was also a manipulative, mentally-ill note Juanita was diagnosed with manic-depressive schizophrenia, though the TV show depicts her mental illness as paranoid schizophrenia mixed with dissociative identity disorder, as she always feared that aliens were after her and she often thought she was other people alcoholic who never took her medication (choosing instead to drink alcohol to medicate it herself—which made her violent outbursts something akin to what you would find in a comic book supervillain) and could convince everyone—including mental hospital board members—into thinking she had her mental illness under control, only for her to fall into another psychotic episode note Juanita's second husband was shot to death in 1986 after he beat her up on Thanksgiving for not having dinner done when he got home from work. After her husband tossed her turkey against the wall, Juanita tried to scald him with some boiling mashed potatoes. The guy got so pissed, he decked her in the face and pounded her to a bloody pulp. Juanita then staggered upstairs, got a gun, came back downstairs and shot the bastard because "...she didn't want him to do that again." Not only was Juanita acquitted of all murder charges, she won the guy's life insurance policy and the acre behind his house that he wanted to use as a shooting range—not a good idea when you're an abusive jerk who's married to a manic-depressive.

Christopher said that, for him, all this was just normal. It wasn't until much later in life that he realized it was wildly unusual and unhealthy and entered therapy — and found, during group sessions, that combat veterans dealing with PTSD saw his life experiences as being worse than what they went through.

One of the defining moments of Titus' life and a key part of his stand-up routine is the fact that, as a teenager, he was a big party animal, taking from his dad, who had a Jekyll & Hyde-style personality flip whenever he drank alcohol. Titus quit drinking and partying at the age of seventeen when he fell into a bonfire, severely burning both of his hands and almost suffocating from smoke inhalation. As he says "Anyone ever shudder with the crap that you pulled off as a teenager and didn't die?"

When he started traveling the stand-up circuit, Titus kept his material in the realm of observational comedy of the "Hey, you ever walk into a store and see..." type. He was scared of showing the audience just how extreme he could be but, under the demands of his manager, he began edging in his dysfunctional family life into his act. Specifically, he talked about how scared he was that his mother's insanity could be genetic and that he wanted to stay away from utensils while guests were around. The results surprised him as the audience loved it, and if he ever went back to the "walk into a store" routine, they would immediately turn off. Eventually, his material encompassed everything about his family and the stuff he had to deal with.

Titus considers his routine to be "Therapeutic Stand-Up," in that being able to joke about such topics as domestic violence, mental illness, suicide, family dysfunction, Domestic Abuse and alcoholism has allowed him to accept those things in his life, try and make peace with his father, and move on to make sure that no one has to suffer like he did. He started to make it big in the late 90's with some TV guest appearances and becoming a featured performer at various comedy clubs.

His act caught the attention of FOX television producers Jack Kenny and Brian Hargrove who met with him about adapting his act (now named Norman Rockwell Is Bleeding) into the television show Titus, which aired in early 2000. They took many of the bits of the act and adapted it into entire episodes, and other episodes were directly inspired by events from Christopher's life. Kenny and Hargrove had experience in theater arts and Christopher is a stage performer, so much of the show was structured in that way. It was a remarkably well-conceived and well-received television show and lasted a respectable three years but, because of the material, it was considered "pushing the envelope" too much and was canceled. Christopher said he preferred the show was canceled due to its content rather than being "not funny." He admitted (detailed in his The Voice in My Head special) that he mouthed off to the President of Fox at the start of Season 3 when she gave him a new direction she thought the show should go in. He proceeded to explain how horrible an idea it was, but did it in front of her entire staff, making a life-long enemy and limiting a lot of his chances to break into television.

After the show, he continued to make random TV appearances but regularly made the stand-up circuit. He had a role in the drama Big Shots that lasted only one season due to the 2007-2008 Writers' Guild strike (which took down a lot of up-and-coming shows and put a lot of Long-Runners on hiatus until February 2008). He even took a spin as a game show host on the game-show Pawnography, a spin-off of the reality show Pawn Stars.

Outside of his professional career, he is an avid car fan (reflected in Titus) and close friends with legendary car customizer Chip Foose. He is also involved with the Titus Podcast, a popular podcast begun in early 2011, with every episode beginning with the "Armageddon Update" where he takes some horrific recent news story and proceeds to talk about the moral values involved. Except in relentlessly heavy touring schedules, the podcast is largely released weekly. The podcast lineup originally consisted of Titus, longtime friend Tommy "Stuntman Tommy" Primo and his now-wife Rachel "Bombshell Rae" Bradley (the new girlfriend as described in Love is Evol). Stuntman Tommy exited the podcast in October 2012, replaced by "Colonel Jeff" Fox (a podcasting veteran occasionally heard on shows on the Adam Carolla Network). "Nerdpunk Jeff", as he was known on the show, remained until January 2014, when he was replaced by Titus' own half-brother, Willie "Jello" Johnson... until it was revealed that the African-American "Willie 'Jello' Johnson" was actually a character created and voiced, believe it or not, by Titus himself. As explained in the episode "The Death of Willie 'Jello' Johnson", Unfortunate Implications led to Titus "killing off" the character, though he does come back in subsequent episodes up to and including the present.

In 2017, he wrote and directed his first independent film Special Unit, about an LA cop forced to supervise a new squad consisting of various individuals with special needs ranging from autism to cerebral palsy to dwarfism. The film was in Development Hell for about a decade, a pilot for a tv series was made back in 2006 for Comedy Central and was passed on.

The Comedy Specials that Christopher Titus has made include the following: