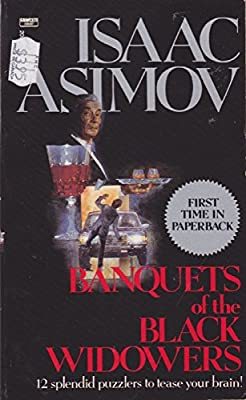 This collection of Mystery Fiction in the Short Story format is based around a small fictional men-only dining club, created by Isaac Asimov. Initially a one-shot, Ellery Queen introduced "The Acquisitive Chuckle" in the January 1972 issue of Ellery Queen's Mystery Magazine as "the first of a new series", so Dr Asimov continued to write new stories with the same setting. A total of sixty-six stories were written by Dr Asimov, and two additional stories were printed with permission of the Asimov Estate.

The format mirrored a real-life club that Dr Asimov participated in, called the Trap Door Spiders. The characters meet monthly in a private dining room at the Milano in New York City. Hosting responsibilities, which include bringing along a new guest each evening, rotate each time. Guests were not allowed to pay for their meal (this is part of the host's responsibilities), usually did not return (though exceptions were made), and could not be a woman (no exceptions allowed on this point). The meal is served by the incomparable waiter Henry Jackson — almost invariably referred to as simply Henry — whom the regulars look upon with high regard and have often insisted on his being a full member of their organization.

At some point after the table has been cleared of dessert, the host rattles his spoon on his water glass for silence. They appoint another Widower as "griller" for the night, who then leads the rest in a semi-formal interrogation of the guest. The first question directed to the guest is to "justify his existence". In the course of the subsequent interrogation/conversation, it always comes out that the guest has a problem, varying from personal issues, to problems at work, and even to actual crimes. The club members try to solve the problem, raising various related aspects in the course of the conversation, but are unable to come to a satisfying conclusion or resolution. In the end, it is Henry who provides the correct, and usually very simple, answer, obtained from details mentioned in their conversation.

Not all of the members are present at each meeting, but the recurring characters are as follows:

Collections of the Black Widowers:

Tropes served at the Milano: