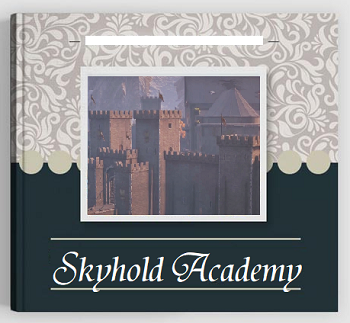 Yeah, this is about as many times as it appears in the series, too.
Advertisement:

"It's probably best described as non-magical Hogwarts staffed by the Second Inquisition of Thedas, with occasional musical numbers and an extremely high tolerance for shenanigans."

Such is the basic premise of Skyhold Academy Yearbook, a High School A.U. Fan Verse starring the cast of Dragon Age, particularly Dragon Age: Inquisition. The castle of Skyhold has been transformed into a boarding school with a secret; under the watchful eye of Headmistress Leliana Nightingale, students from across modern Thedas come to study with the most eclectic and doting cast of teachers any video game could hope to spawn. It's a complete mishmash of canon references and modern media from the real world; the magic has been stripped from the setting, all the characters are human, and almost everybody's hiding a little something about themselves.

Evangeline Trevelyan comes to serve as Skyhold Academy's art teacher for a year while Marian Hawke, the regular instructor, is on sabbatical. It doesn't take long for the entire cast to start shipping her with Cullen Rutherford, the popular but shy history professor, and the school year brings months of wacky adventures, mutual pining, terrible jokes, and enough nonsense to get a normal school staff fired on the spot. But Skyhold is not a normal school by any stretch of the imagination. Meanwhile, alongside the shipping and the occasional Disney movie, the school has to contend with the antics of their hated rival; the Skyhold Academy Chargers and the Venatori Prep Red Templars have a long-standing grudge and the repercussions are more serious than ever.

The whole thing creates tremendous Fanfic Fuel for the students, of course. And the Adventure Continues.

Advertisement:
Stories in the series
The original story, Skyhold Academy

, covers the events of Evvy's yearlong tenure as the art teacher. Although this was initially planned to be a stand-alone story, it spawned a number of spinoffs and sequels:

The entire saga is written through roleplay between Lady Norbert and AuroraBorealia, and published on Archive of Our Own. Now has a Character sheet.

open/close all folders
The series as a whole

Tropes present in the entire series

Tropes found in I Must Be Going - the framing device:

Tropes found in I Must Be Going - the actual story written by Varric:

Meta tropes for this installment

Tropes for the framing device

Tropes for Jim and Rory's story

Tropes for the installment in general:

Love is a Mystery
Ordinary Chaos
The Red and Gold Dossier