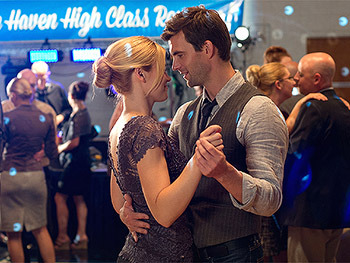 A common trope used to give a character or characters a chance to interact with old classmates and/or as a flash-back to the days when they were in school. Sometimes used to portray how much a character has changed, grown-up, or become "cool" (or alternatively, how the character hasn't changed a bit), or just as an excuse to put the character in a funny looking wig, glasses or braces.

Often, the roles the characters held when they were at school have been completely reversed to ironic effect; the Alpha Bitch and her Girl Posse who once ruled the school with velvet fists are now frumpy, frustrated housewifes, the Jerk Jock who was king of the sports team is now an overweight loser (usually married to the ex-Alpha Bitch, much to their mutual regret), the mousey shy girl in glasses who was picked on mercilessly by the Alpha Bitch now possesses the looks of a gorgeous supermodel and the nerds and Geeks tormented by the Jerk Jock are now handsome super-successful Dot-Com millionaires.

Sometimes shows with ensemble casts will reveal that Everyone Went to School Together, in which case an alternative to the above is that they're all in exactly the same roles.

Subtropes include Reunion Revenge; Old Friend, New Gender may also occur, but is not an actual Sub-Trope.